In Polar Covalent bonds, Induction is the attraction of the shared electrons in a bond towards the more electronegative atom.

Induction is caused due to the difference in electronegativities between the bonding atoms. From bonding, we know that a polar covalent bond is a bond wherein one of the atoms exerts a greater pull on the bonded electrons. This takes place due to the difference in electronegativity (between 0.5 and 1.7) between the bonding atoms and gives rise to partial charges on each atom. The more electronegative atom acquires a partial negative and the other acquires a partial positive charge. These charges are represented by the Greek symbol ‘delta’ (δ)

For Example – The molecule Chloromethane comprises 3 C—H bonds and 1 C—Cl bond. The electronegativity of the atoms are C = 2.55, H = 2.20 and Cl = 3.16. Therefore, we note that the C–H bonds exhibit negligible polarity while the C—Cl bond will exhibit observable polarity. The Cl atom will pull the shared pair electrons with aa greater force thereby giving rise to a partial negative charge on itself and a partial positive charge on the Carbon atom. 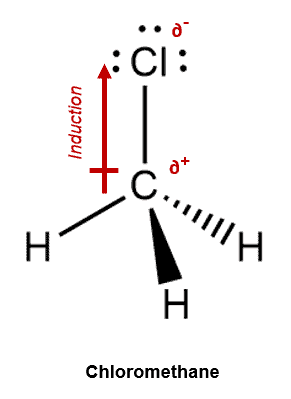 A note on electronegativities, from the periodic table –