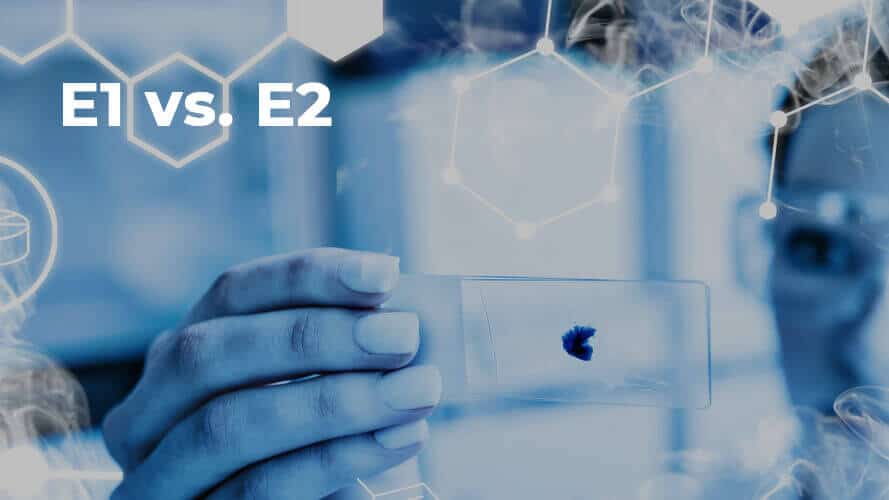 For E1 reaction
For E2 reaction
The Zaitsev Rule 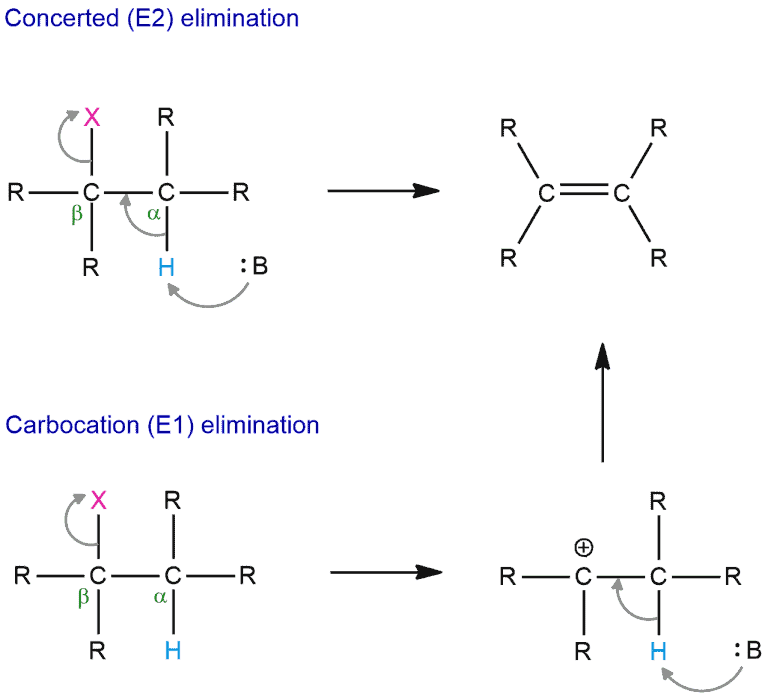 Both reactions generate the same result but depending on which mechanism is used there are some differences.

Both usually require polar protic solvents which in the E1 process serves as a nucleophile and help the leaving group to leaves, and in the E2 process, they are solvents for a strong base.

Here’s another example where from the same starting compounds we can obtain the products. In the first reaction, when the starting compound is heated, the leaving group (chloride ion) is removed. The carbocation is obtained. In the second step, water removes a hydrogen in the β position (the carbon next to the positively charged carbon) and a double bond is formed. In this reaction, under these conditions, the SN1 by-product is also obtained. With it E1 and SN1 reactions very similar, only nuances determine which of these two products will dominate. The E1 product is favored by an increase in temperature.

In the E2 reaction, we have the same starting compound that is attacked by the base in the first step. Hydroxide removes hydrogen in the β position and these electrons generate a double bond by expelling the leaving group. No byproducts are obtained here. An alkene is a major and only product.

As we can see, the only difference between these two reactions is a base! So, if we have a tertiary halide in presence of a strong base, the E2 will dominate over E1!

Like every first one, this was a simpler example. Now we will see what happens to those more substituted compounds. They are a bit more complex. 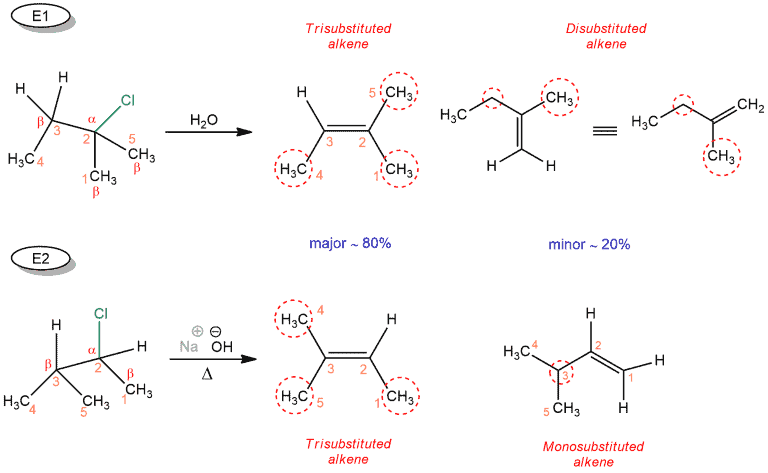 In the previous case, we didn’t care about stereochemistry because we could form a single product. However, this isn’t the case here. As we know, a double bond between the carbon atoms for which the halide (α carbon) and the adjacent carbon atom (β carbon) are attached are formed.

How do we determine which of these carbons will participate in the double bond? Using the Zaitsev rule!

The major product is the more stable product—the one with the more substituted double bond.

How is this determined?

First, you must determine α carbon – It’s the carbon that the halide is attached to. Each carbon next to that is β carbon and a double bond can be formed between any two C atoms – one is always α, the other β. In the E1 reaction, we can obtain three different products because we have three β carbons. But when we draw all these products, we can see that disubstituted alkenes are the same when rotating the structure.

These prefixes denote the number of carbon atoms attached to the double bond (rounded red).

But this is not all. We have another rule about the stereochemistry that we have to apply. This is the case that we can see in the examples with substituted cyclohexanes. 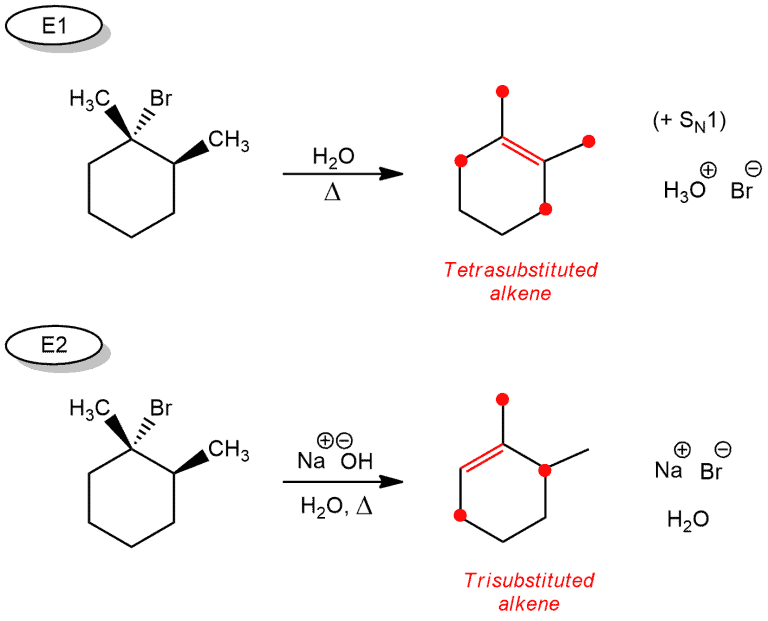 If we applied the previous rule to get a product, we would see that it is correct for just one reaction (E1). 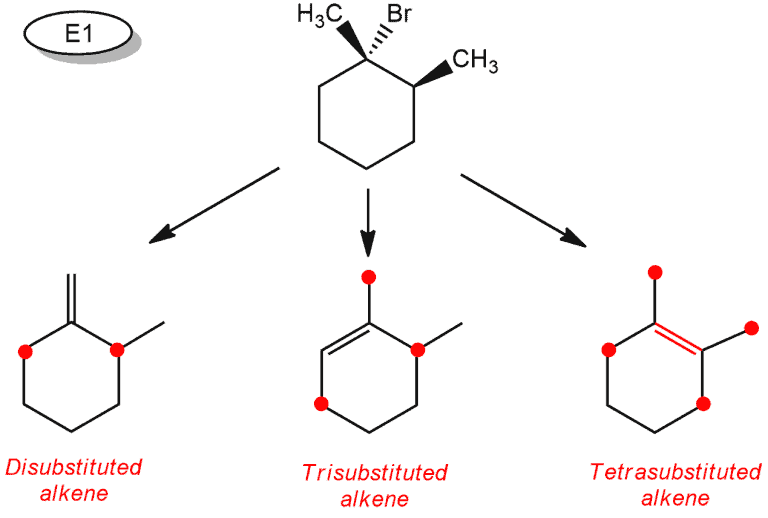 But as our starting compounds are the same, the same product could be expected for another reaction, but this is not true. In these reactions, we need to apply the following rule:

Recall that, in the cyclohexane chair conformation, groups can either be axial (pointing straight up or down) or equatorial (pointing “somewhat up” or “somewhat down”). In order for a hydrogen to be anti to a leaving group, it’s required that both groups be axial.

In our cyclohexane ring here, the hydrogen has to be axial. That’s the only way we can form a π bond between these two carbons; we need the p orbital of the carbocation to line up with the pair of electrons from the C-H bond that we’re breaking in the deprotonation step. We can always do a ring flip to make this H axial, so we can form the Zaitsev product. Using the Newman projection, we can more clearly demonstrate the anti-periplanar relationship between the leaving group and the hydrogen. 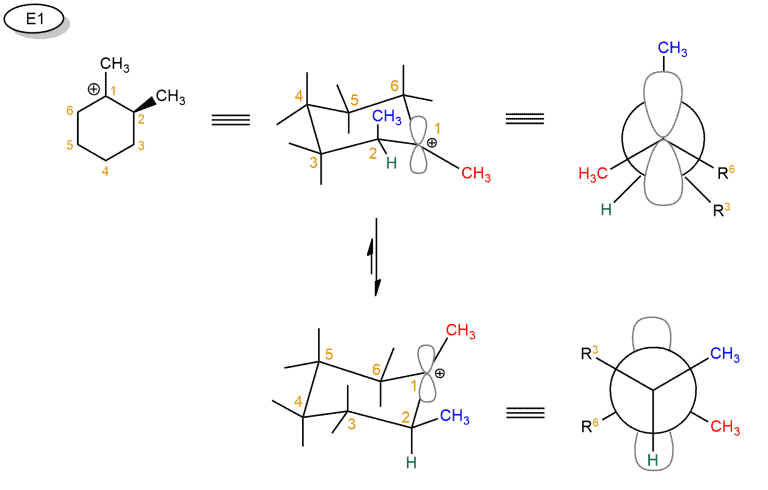 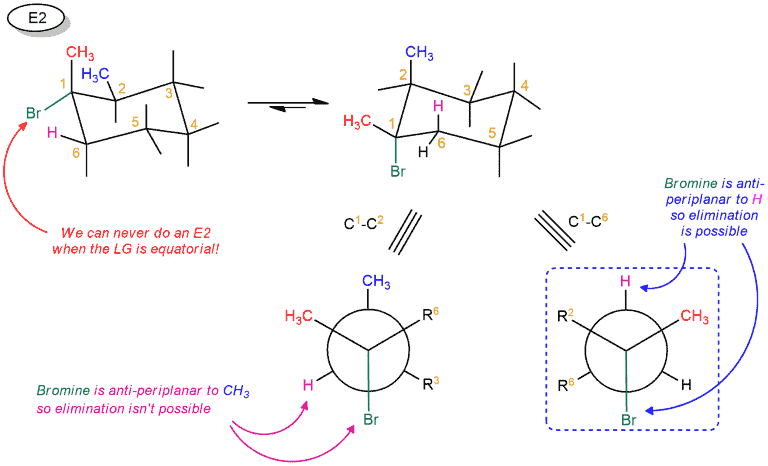 If you have any questions or would like to share your reviews on the E1 vs. E2, then comment down below. I would love to hear what you have to think.