Esterification is a chemical reaction that occurs between the acid (usually carboxylic acid) and the alcohol (or compounds containing the hydroxyl group) where esters are obtained. The reaction takes place in acidic environments. In this process, water is also obtained. It, therefore, falls into the category of “condensation reactions“.

The reaction between carboxylic acid and alcohol is known as the Fischer esterification. And this is one of the most important reactions of carboxylic acids.

Most carboxylic acids are suitable for the reaction, but the alcohol should generally be a primary or secondary alkyl. Tertiary alcohols are prone to elimination.

When a carboxylic acid and an alcohol are mixed together, no reaction takes place. However, upon addition of catalytic amounts of an acid, the two components combine in an equilibrium process to give an ester and water. The presence of the acid catalyst in the mechanism of ester formation helps in two way:

In the first step, protonation of the carbonyl oxygen gives a delocalized carbocation (resonance structures aren’t shown in this mechanism because they don’t play an important role) which makes the carbonyl carbon a much better electrophile.

In the second step, the carbonyl carbon is susceptible to nucleophilic attack by ethanol. A lone pair of oxygen makes a bond with the carbonyl carbon and π bond breaks. These electrons from π bond go up to the oxygen and remove the positive charge. This gives us the oxonium ion.

In the third step, proton transfer from the oxonium ion to one of the OH groups gives us an activated complex. (Depending on the literature, you can find this step divided into two where the alcohol deprotonates the oxonium ion to give tetrahedral intermediate. And then, one of the hydroxyl groups takes the proton from protonated alcohol.)

Subsequent 1,2-elimination of water, in the fourth step, leads to the protonated ester. A lone pair of oxygen forms the π bond which will expel water as a good leaving group.

In the last step, deprotonation gives us our final product – ester! 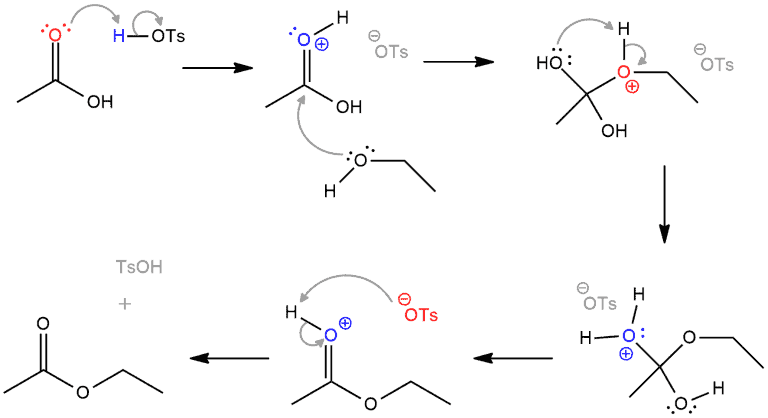 All the steps are reversible; therefore, either addition of excess alcohol or removal of water favors esterification.

The reverse reaction is called hydrolysis. It can be catalyzed by both acid and base.

It is also possible to intramolecular esterification if we have a molecule that contains both the carboxylic and hydroxyl groups. In the intramolecular reaction, a cyclic ester is formed. Cyclic esters are also called lactones. 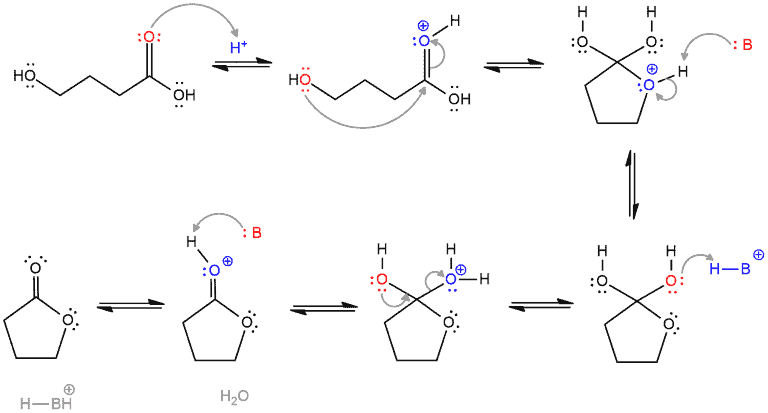 If you have any questions or would like to share your reviews on the Esterification, then comment down below. I would love to hear what you have to think.