All animal cells have a lipid bilayer membrane that interacts in the environment that it is in. This means that various proteins come and go, resulting in interactions that characterize cellular function.

Some proteins are components of lipid bilayers, while others come and go as needed.

In this article, we’ll go over the basics of membrane proteins.

Peripheral proteins (or extrinsic) proteins bind loosely to the lipid bilayer surface and interact with the polar head groups.

The types of interactions involved could be:

Much stronger attachments than peripheral protein.

A type of integral protein that spans across the entire lipid bilayer.

Typically you might have a protein that has hydrophillic amino acids on the outside while the more nonpolar amino acids span the membrane.

Lipid-linked proteins are found are the surface of a bilayer by a covalent anchor to the protein.

In prenylation, the protein is attached to hydrophobic groups built from isoprene units and are attached via thioether linkage to Cys at C-X-X-Y recognition sequences. (X= irrelevant amino acid; Y = amino acid that determines type of prenylation .

In Glycosylphosphatidylinositol-linkage you simply have the GPI group link to your protein. 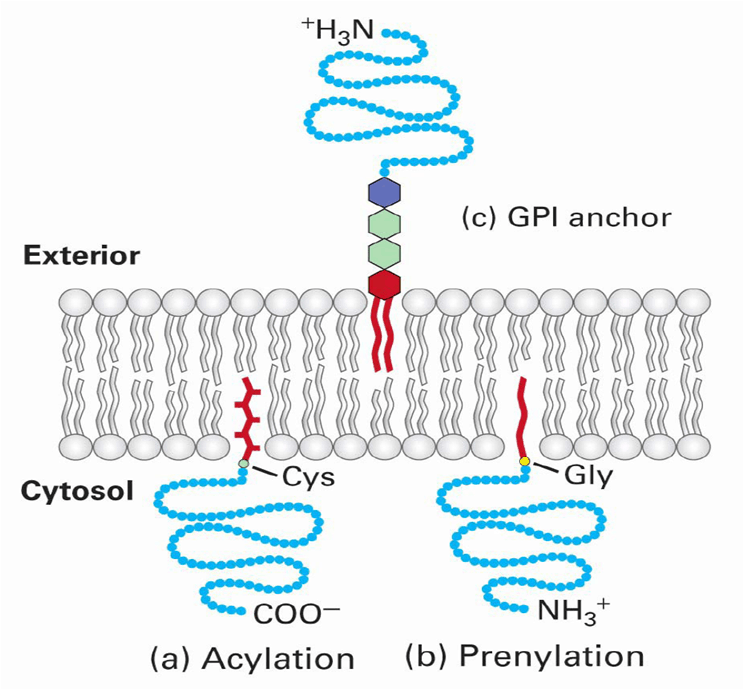