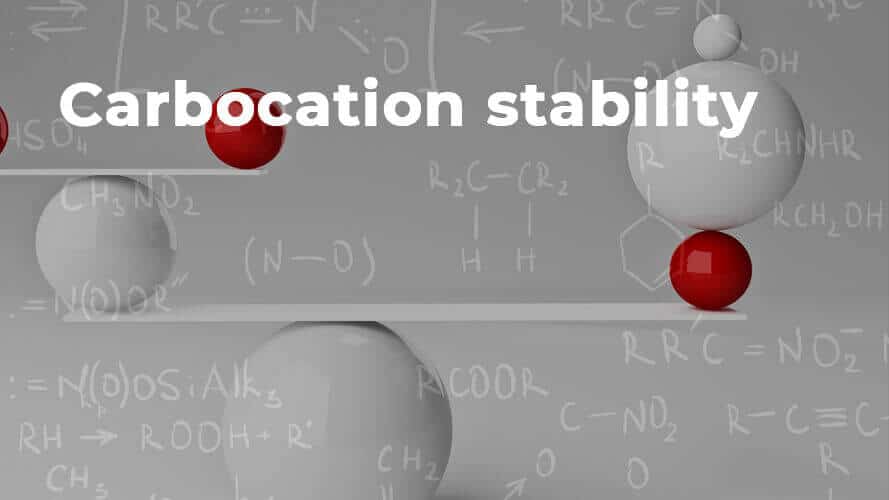 Carbocations often occur as intermediates in reactions in Organic Chemistry. It is therefore important to get acquainted with its characteristics. This will help you master carbocation intermediate reactions down the line including Markovnikov alkene addition reactions, unimolecular substitution SN1, β elimination E1, and so much more.

This means that positive charge on the carbon atom of the molecule.

Formation of the carbocation

Here’s another example – Addition of π electrons to an electrophile. One of the two carbon atoms involved in the π bond will have three bonds instead of four and bears the positive charge.

Being electron-deficient (and therefore unstable), the formation of a carbocation is usually the rate-limiting step in these reactions.

In the sp3 hybridized carbon atom, we have four attached substituents. Each of these four bonds consists of 2 electrons (the octet rule). When one pair is removed, carbon remains only 6 electrons in total. Therefore, we say that the carbon is electron-deficient. Such a carbon is sp2 hybridized. Carbocations are electron-poor: they have less than a full octet of electrons. 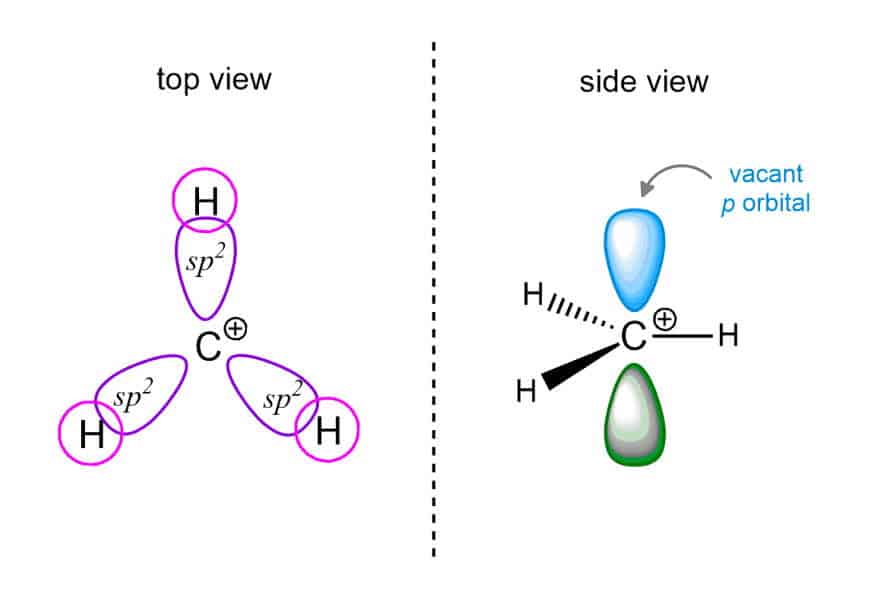 Classification of carbocations (in brackets is the abbreviation):

Why is the tertiary carbocation the most stable?

There are two ways to stabilize carbocations:

Both hyperconjugation and resonance are forms of electron delocalization. They are distinguished by the type of orbital: Resonance normally refers to the π-type overlap of p orbitals, whereas hyperconjugation incorporates overlap with the orbitals of σ bonds.

Hyperconjugation is the result of the overlap of a p orbital with a neighboring bonding molecular orbital, such as that of a C–H or a C–C bond. In a carbocation, the p orbital is empty. The alkyl group donates electron density to the electron-deficient center and thus stabilizes it.

When we compare the orbital pictures of the methyl and tert-butyl carbocations, we can see that each methyl group increase the hyperconjugation interaction. The order of stability of the carbocations is a consequence of this effect.

Another important thing to mention here is electronegativity. If you look at the C-H bond, carbon has an electronegativity value of 2.5, and hydrogen 2.1. We can see that the carbon is slightly more electronegative than hydrogen. Thus, carbon pull electron density toward itself and, therefore, this carbon is a partial negative charge (δ-), and hydrogen is a partial positive charge (δ+). When we have a carbocation next to a partially negative carbon, this carbon can donate some density to that carbocation.

In organic chemistry, we also encounter molecules for which there are several correct Lewis structures or resonance structures. They have the characteristic property of being interconvertible by electron-pair movement only, the nuclear positions in the molecule remaining unchanged.

Let’s look at the following examples:

Question: How to determine the order of stability of these carbocations?

The first thing you need to do is to determine the type of carbocations, whether it is primary, secondary, or tertiary.

If we know the order of stability of carbocations, we know that tertiary is the most stable, then is secondary, and primary as the least stable. But if we have more carbocations of one type, then we have to determine which of them is more stable. So, when we compare these two tertiary carbocations (3 and 4), we can see that carbocation #3 is a typical carbocation stabilizing with hyperconjugation. And the carbocation #4 is allylic carbocation (the double bond is one carbon away from positively charged carbon) which is stabilized by resonance. Here are their resonant structures:

REMEBER 1: as soon as you can draw the resonant structures of a carbocation, then this carbocation is more stable! And this is because the positive charge is shared by two atoms, not on the one.

We have one more case in this example with primary carbocations (1 and 5). The carbocation #1 is a saturated carbocation which is stabilized by hyperconjugation. But carbocation #5 is vinylic carbocation (positively charged carbon is sp2 hybridized, i.e. carbon of the double bond) and this is the least stable. The reason being is the positive charge directly on a double bond so we can’t draw any the resonant structures.

In some literature, you will find that the compounds with heteroatoms stabilized by resonance are a separate type of stabilization, but this is a resonance no matter which atoms are in question.

If you have any questions or would like to share your reviews on the Carbocation stability, then comment down below. I would love to hear what you have to think.