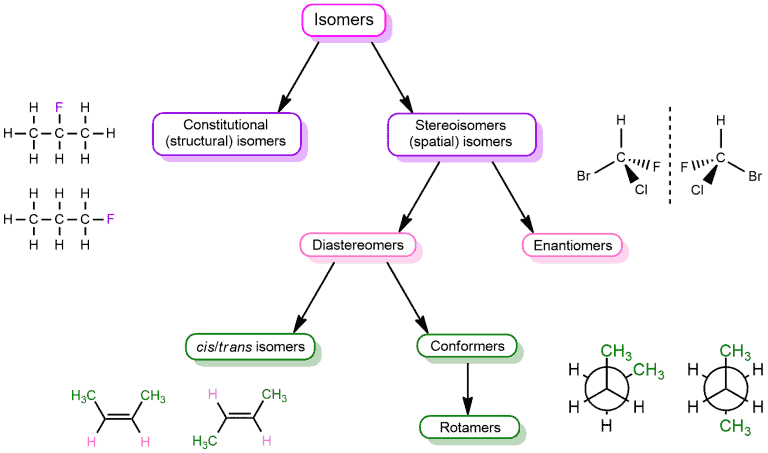 Stereoisomers can be further divided into several subcategories, but we will describe only enantiomers and diastereoisomers in this post.

The two molecules which related as object and mirror image is called enantiomers. Each isomer of the image – mirror image pair is called an enantiomer. We can also say that these two molecules are enantiomers to each other. A molecule that is not superimposable on its mirror image is said to be chiral. A chiral center is a carbon atom bonded to the four different substituents. In contrast with chiral molecules, compounds having structures that are superimposable on their mirror images are achiral. This means that the achiral center has at least two identical substituents. Here are some examples: 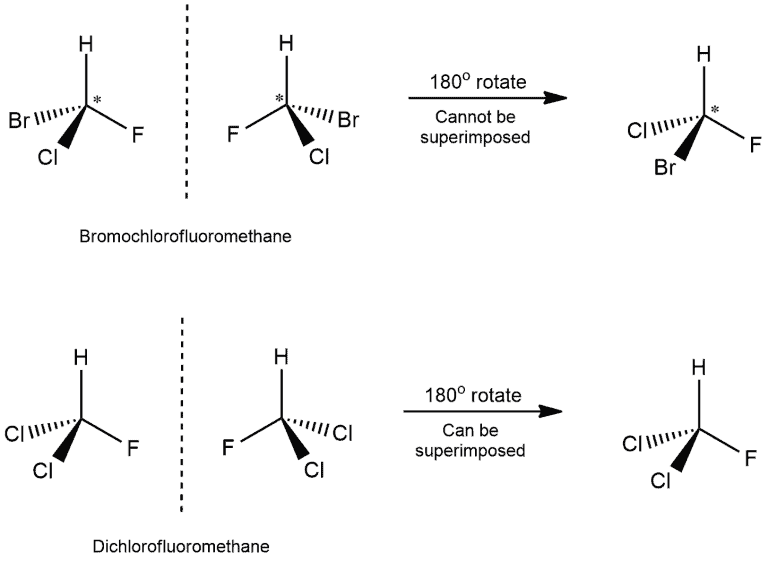 In the first example, we can see that four different atoms are attached to the carbon atom. Those are bromine, chlorine, fluorine, and hydrogen. The chiral center is marked by a star (*), which is the usual way of marking it. When we would put the mirror next to the molecule on the left, we would get the molecule on the right. Then, if we would rotate this molecule by 180 degrees, we wouldn’t get the same molecule as on the left. Hydrogen and fluorine will be in the same position but chlorine and bromine on the opposite. And because of that, we get non-superimposable structures. While in the other example, we have two chlorine atoms attached to the carbon. When we rotate the mirror image, we get the same molecule as on the left! This means that this molecule has superimposable structure.

These two enantiomers can be distinguished by their names by looking at their R,S designations. These designations are related to the chiral atoms. Each chiral atom is designated by R or S which depends on whether priorities of the substituents go in the clockwise (R) direction or the counterclockwise
(S). The priority of the substituent is determined by atomic numbers. Since it starts with the largest number, which means that the hydrogen will always be the number four (or in the last place). Number four is always in the back! This means that hydrogen (if it’s fourth) is on a DASH!

The name of this compound is S-bromochloroethane.

But if look at our first example, hydrogen is not on a dash! It’s in the plane of the page. In this case, we need to do something to put a hydrogen on a dash. And we have several ways to do this, for example:

This is why learning to figure out R/S designations is such a key skill! You can figure out whether two molecules are enantiomers (or not) simply by examining their names and their R,S designations!

You can also tell if molecules are enantiomers or diastereomers by looking at their R,S designations.

A diastereomer is a stereoisomer with two or more stereocenters and the isomers are not mirror images of each other.

In the following example, we have three stereocenters. On the first and third configuration is different (which would resemble the enantiomers) but on the second stereocenter is the same configuration. This means that they aren’t enantiomers but diastereomers.

A molecule containing several stereocenters emerge in several possible structures since each center can be R or S. So if we have stereoisomer that contains two stereocenters, how many stereoisomers are possible? There are four, as can be seen by completing a simple exercise in a permutation. Each stereocenter can be either R or S, and, hence, the possible combinations are RR, RS, SR, and SS. 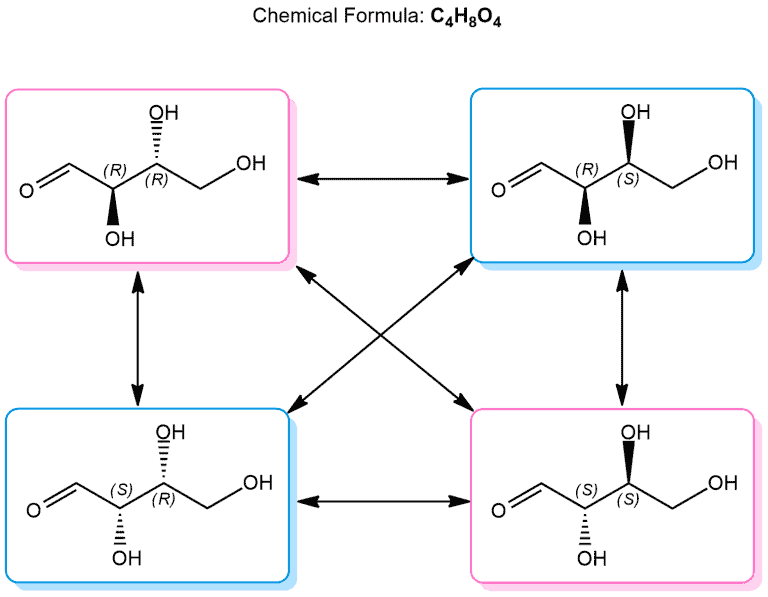 By looking closely at the structures of the four stereoisomers, we see that there are two related pairs of compounds: an R,R/S,S pair and an R,S/S,R pair. The members of each individual pair are mirror images of each other and therefore enantiomers. Conversely, each member of one pair is not a mirror image of either member of the other pair, therefore, they are not enantiomeric with respect to each other. They are diastereoisomers. The following rule can be applied to all molecules with two stereocenters: 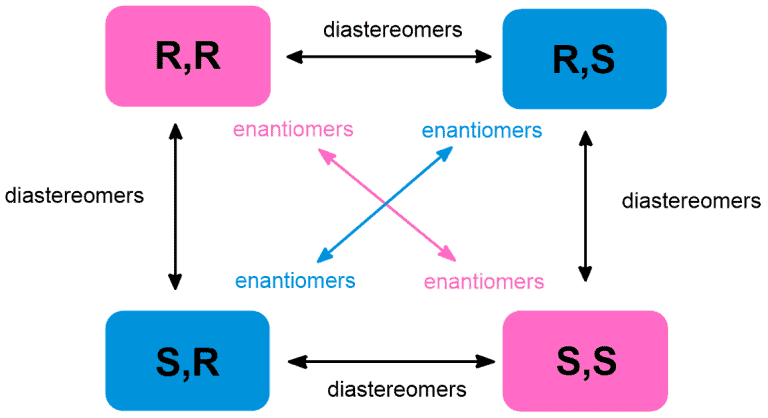 So, a compound having three such centers gives rise to a maximum of eight stereoisomers; one having four produces sixteen; one having five, thirty-two; and so forth. And more and more.

Enantiomers and diastereomers are stereoisomers with the same molecular and structural formula but different arrangement/configuration of the atoms that make their structures. We have seen that enantiomer molecules are the mirror images of one another and the diastereomers are not mirror images. Both molecules are non-superimposable. Also, the naming of the structures of enantiomers unfolds with the R and S naming system assigned based on the atomic number of the substituents attached on the chiral center. In diastereomers, only one structure has the R and S configuration while the other has same configurations. This is what distinguishes them from enantiomer mirror images. Enantiomers have the same chemical and physical properties but differ in optical properties because some rotate polarized light in opposite directions. Two enantiomers can be distinguished by their optical activity, that is, their interaction with plane-polarized light as measured in a polarimeter. One enantiomer always rotates such light clockwise (dextrorotatory), the other counterclockwise (levorotatory) by the same amount. The interconversion of enantiomers leads to racemization and the disappearance of optical activity. On the other hand, not all diastereomers have the optical activity. The steric interactions and energies of diastereomers differ. They can be separated by fractional distillation, crystallization, or chromatography. They have different melting and boiling points and different densities, just as constitutional isomers do. In addition, they have different specific rotations (the specific rotation is a physical constant possible only for chiral molecules).

If you have any questions or would like to share your reviews on the Enantiomers vs. Diastereomers, then comment down below. I would love to hear what you have to think.