All molecules experience intermolecular attractions, although in some cases those attractions are very weak. As nature (type) of the bonds in the molecules is different, so are the forces between molecules are different. There are four types of these interactions:

It occurs in ionic molecules where the ionic bond is formed by the complete transfer of valence electron(s) between atoms. This means that ionic forces are interactions which occur between charged atoms or molecules.

The attractive forces between oppositely charged ions are described by Coulomb’s Law, in which the force increases with charge and as decreases as the distance between these ions are increased. The highly polarized (charged) nature of ionic molecules is reflected in their high melting points as well as in their high water solubility.

If we have two molecules of acetone and when we look at the carbon-oxygen double bond, we can see:

From this we can conclude:

The boiling point of acetone is 56°C and it would be liquid at the room temperature (25°C). This has to do with the intermolecular force of the dipole-dipole interaction that holds these molecules together. 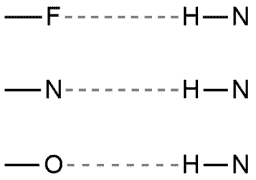 We will explain in the example of water. We have the same story as with acetone: oxygen is more electronegative than hydrogen, and it will draw electrons from the O-H bond closer to itself, giving oxygen a partial negative charge (δ-). The hydrogen loses little electron density so it becomes partially positive (δ+). Between the hydrogen of one molecule and the oxygen from the other, there is an electrostatic attraction (between two opposite charges), and this is a hydrogen bonding. 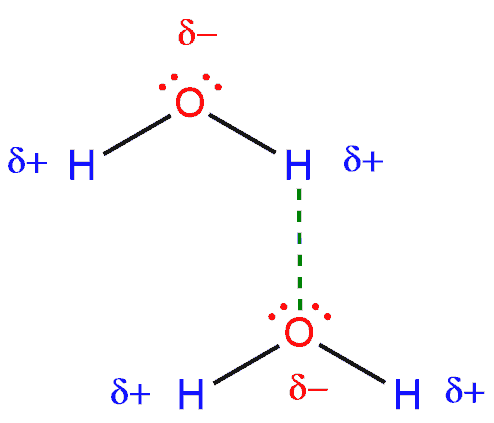 This explains the exceptionally high boiling points and melting points of compounds. For example, the boiling point of water is 100°C which means that water is liquid at the room temperature (25°C). And if we would like to break the relationship between these molecules, it would take more energy or more heat is needed to convert it to gas. So the hydrogen bonding is stronger than the dipole-dipole interaction.

When we look at these two methane molecules, we have a carbon that is surrounded by four hydrogens. There is a very small difference in the electronegativity between carbon and hydrogen that can be disregarded. Therefore, the methane molecule becomes nonpolar as a result. The electrons in these bonds are constantly moving. And when at one moment, for example, in the left-hand molecule are situated on its right side, in the neighboring molecule the same happens. So, the right negative side of the left molecule and the left positive side of the right molecule are attracted. 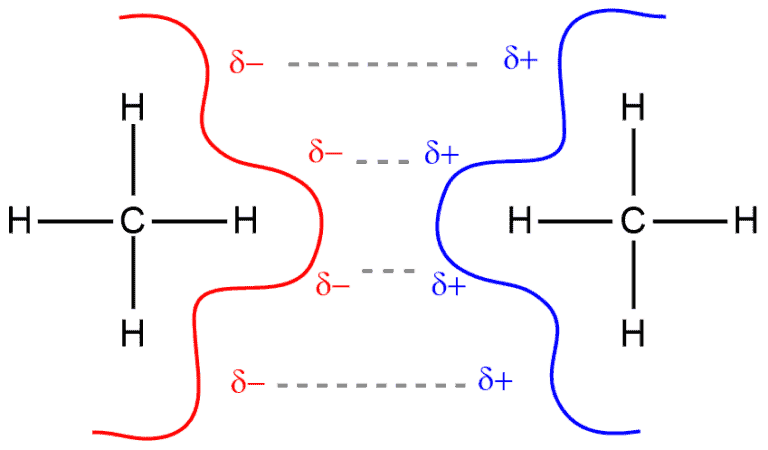 This attraction is very small and makes London dispersion forces the weakest intermolecular forces. And since it is weak, we can expect the boiling point for methane to be extremely low, which is true. The boiling point of methane is -164°C which means that it is gas at the room temperature.

As we have already said, the more electrons the molecule possesses, the London dispersion forces are stronger. In this way, increasing the number of carbons (more carbon more electrons) will increase the number of attractive forces that are possible. With this increase, the boiling point will also increase.

For all these intermolecular attractions, the main role is played by electronegativity. Which of these forces will be represented and to what extent depends on electronegativity. So, it is good to have the following table at hand: 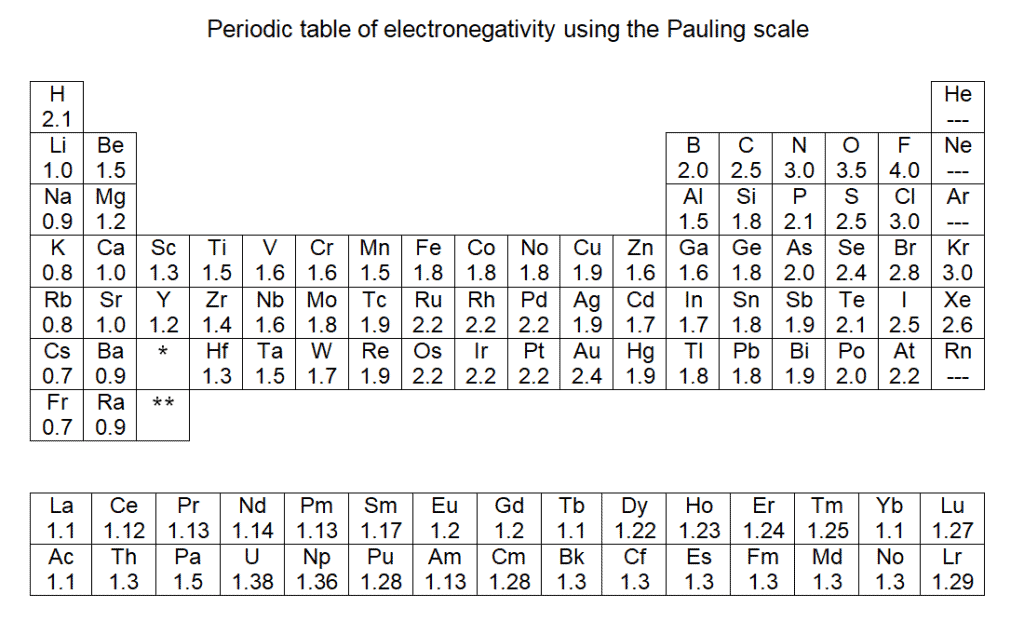