The nomenclature is a very important part of organic chemistry. The names are not given only to compounds but also to the carbon atoms that make up this compound.

Thus, we can classify carbon atoms as primary, secondary, tertiary, or quaternary. These terms refer to the substitution level that a given carbon has in a molecule. In other words, these terms are used to describe how many other carbons a given carbon is attached to. This classification applies only to saturated carbons.

This can be explained by one of the important properties of carbon and is its tetravalency. Carbon is a strict octet follower, which means it needs a maximum of 8 electrons to form stable compounds. Since a carbon atom has 4 valence electrons, it can form up to 4 bonds with different elements. Part of the reason why there are millions of compounds of carbon is its ability to form a very stable bond with another carbon atom. 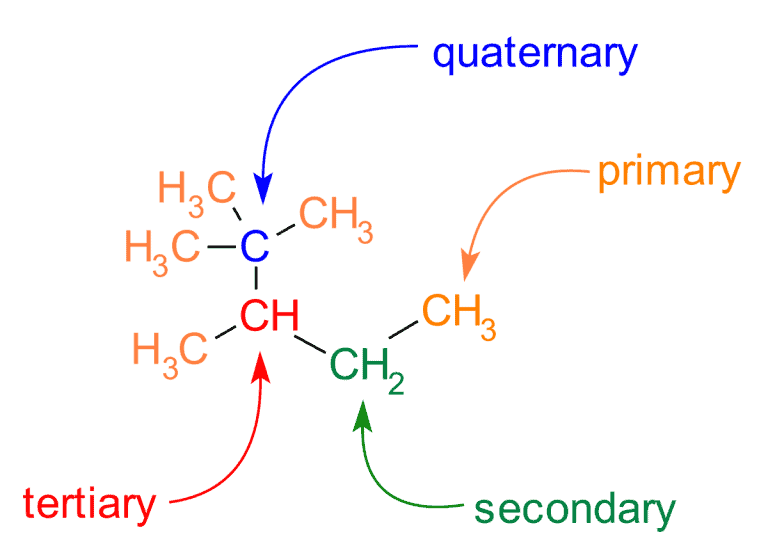 The same terminology is used for carbocations. A primary carbocation is attached to one other carbon, a secondary to two, and a tertiary to three. A quaternary carbocation does not exist without violating the octet rule.

For example, you get the following compound to determine which primary, secondary, tertiary, or quaternary carbons are. As mentioned above, a primary is attached to one carbon atom, a secondary to two, a tertiary to three, and a quaternary to four other carbon atoms. For each carbon atom, you need to count how many carbon atoms next to it that particular carbon atom is connected to.

There is another rule:

OK. These are carbon atoms. But what about the hydrogen atoms which are bonded to these carbon atoms? Yes, they can also be primary, secondary, and tertiary. It depends on the carbon atoms they are attached to. So follow the next rule for hydrogens:

The rules apply the same way for alcohols as it does for alkyl halides. For the most groups like alcohols, alkyl halides, and hydrogen atoms to determine if it’s primary, secondary, or tertiary, look at the carbon atom that bears those atoms, ignore this atom or group and count how many carbons are attached to it.

Here is a slightly different story. Amines are named according to the number of carbons attached to nitrogen. Primary, secondary, and tertiary amines are nitrogens bound to one, two and three carbons, respectively. They also form quaternary amines, since the nitrogen has a lone pair and it possible to form another bond to carbon. They bear a positive charge on nitrogen and are not at all basic. They are often referred to as quaternary ammonium salts.

For carbocations, that is cations if carbons, carbons with more carbons attached on (i.e. tertiary) tend to be less electron-deficient due to hyperconjugation from nearby C-H bonds. Therefore, tertiary carbocations are more stable compared to secondary, primary, and methyl, respectively.